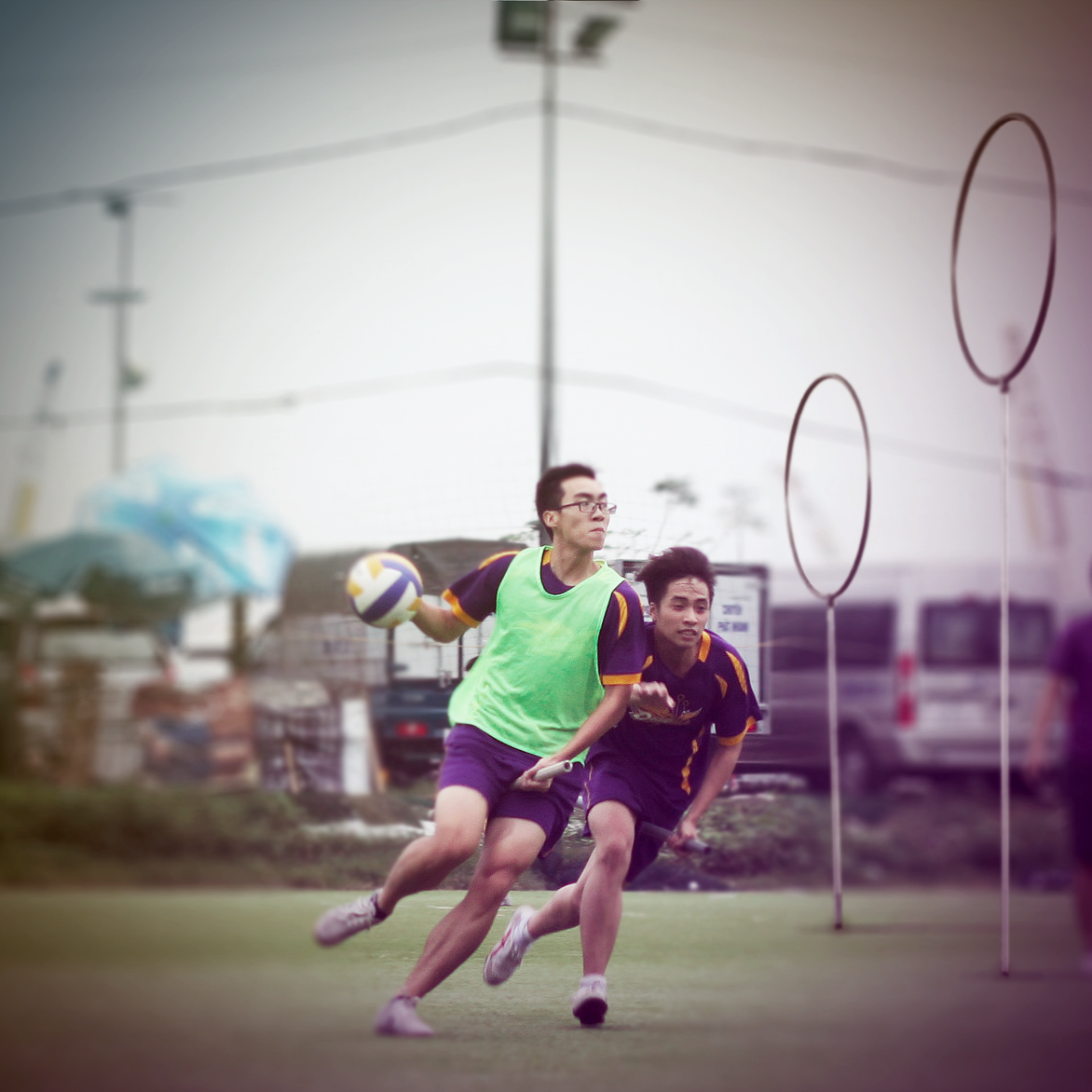 Unlike other sports, muggle quidditch was imported into Vietnam by a bunch of bookworms. For a year now the ‘wizarding’ sport has been striving to gain not only popularity but also seriousness in such a conservative Oriental country.

“One thing more awesome than Quidditch itself is the fact that it’s real,” says Khoa Duong, one of the first Vietnamese quidditch players.

In 2005 Middlebury College introduced the non-flying version of the magical sport in J. K. Rowling’s Harry Potter saga to the “muggle world” in Vermont, USA. Nine years later Vietnam had its pioneer team in Saigon, where students only play a few old sports (other than Math), and neither lacrosse nor cricket has ever been heard of.

“Even in the US, many people would consider quidditch weird and nerdy. In Vietnam, the challenge is tripled,” says Saigon GiantsQuid’s captain Alex Nguyen, who came back from her overseas study in Ohio State University.

Apparently, not everyone is comfortable to be seen running with a broomstick between their legs, which is mandatory for all players at any time in the pitch. And it must be even worse to rush around in a shocking yellow shirt with a visible tennis ball dangled behind your shorts. But accept it — that is how the match-breaking golden flying Snitch is translated in the real world.

Other than the Snitch which values 30 points for capture, muggle quidditch involves Quaffle and Bludgers just like in the original sport. One Quaffle, usually a slightly deflated volleyball, is to be passed by Chasers and scored through any hoop for 10 points each. And three Bludgers, instead of two, are to be kept and hit by Beaters at the rival players’ to get them knock-out. 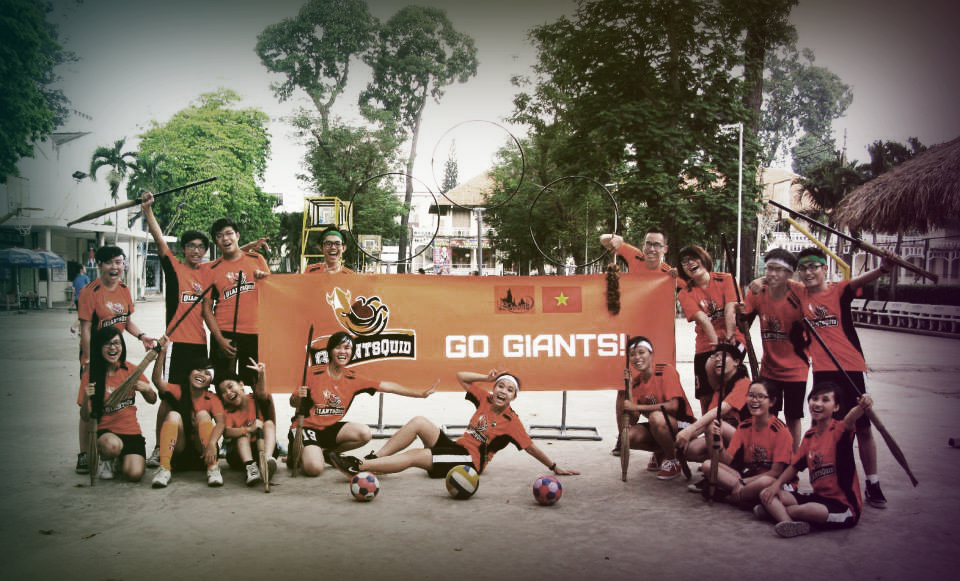 The First Quidditch Team in Vietnam — Founded in October 2014.
GiantsQuid is a word play between Giants Quidditch and Giant Squid (a popular magical creature in Harry Potter).

Not having made it into the Olympics yet, for now quidditch also means do-it-yourself. Hanoi Draco Dormiens’ founder Linh Nguyen recalls, “We five people spent a whole day in my house, measuring and cutting plastic water pipes, joining them into frames and then soldering the pillars with metal hoops. We might be lucky to have advantages in following the GiantsQuid, but we were also proud to make a lot of improvements on our own.”

You suppose they must be all crazy Potter fans to have gone to all such lengths. Actually, it is no longer necessarily true. A few months after the foundation, both GiantsQuid and Draco Dormiens attracted more people coming for various reasons.

Chaser Hiep Nguyen joined Draco Dormiens because “No football team accepted me.” Whereas, Beater Han Le and her best friend Trang Nguyen came “to give sports another try, or for sports to give us another try.” The girls have always lacked confidence in sports, but been in want of healthy exercise as well. “Then why not start with a sport coming from a book we love?”

Yes, quidditch encourages people partly because it’s new. Everyone is a beginner, so be bold. And on top of that, it welcomes everybody, literally, as both genders play together. In fact, it is a well-known rule by the International Quidditch Association that each seven-people team can have no more than four members of the same sex. 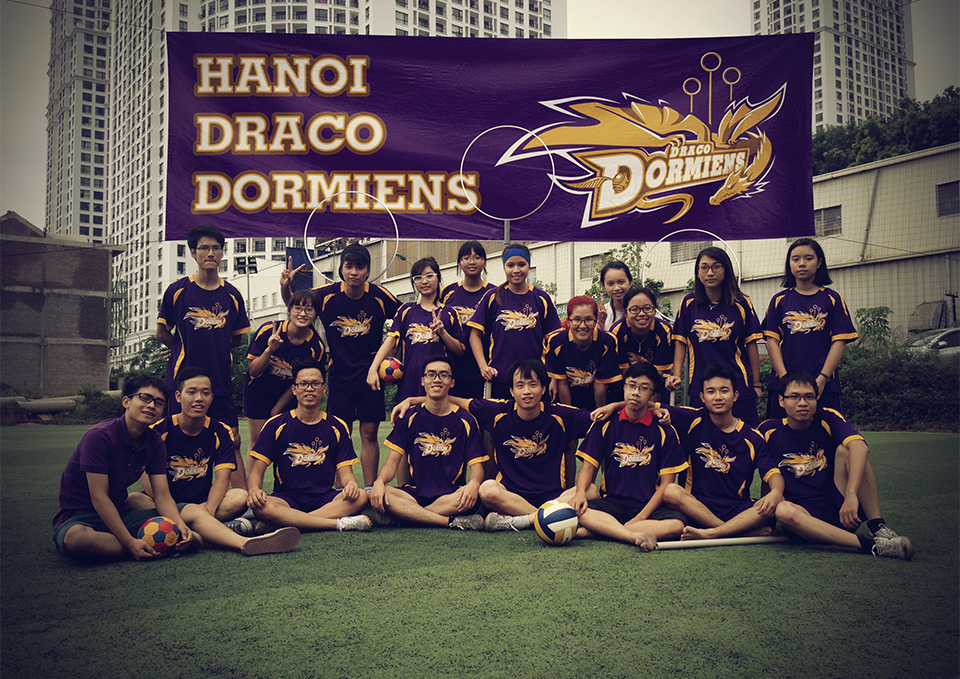 The first quidditch team in Hanoi was founded on 14 June 2015. It is named ‘Draco Dormiens’, Latin for ‘sleeping dragon’, taken from the motto of Hogwarts™ in Harry Potter™.

However, the amount of athleticism and dexterity in the match before my eyes is beyond any expectation for a 5-month-old club of readers, underdogs, and girls.

Quy Le, the man of the match, just got himself a terrible knee injury after a full-force contact with Yen Pham. Despite looking a bit guilty, the girl still laughs. “It’s sportsmanship dude! You will play nasty as long as you can.”

Sportsmanship, it is what all these players are after. No matter what dragged them into the oval pitch at first, they are now playing with entire energy like any other devoted athletes. “You cannot have watched or played quidditch with any slight doubt of its sportiness. It’s as intense as volleyball and as violent as rugby. It’s more than rugby and volleyball packed together. You know, my sport has got more balls than yours,” says Giang Nguyen, a proud member of Draco Dormiens.

Speaking of pride, new captain Quy Le can’t show more of it when talking about his team’s achievements. “We’ve got featured on our National TV broadcast to the world, and on quite a few magazines and newspapers. Together with GiantsQuid, we established Vietnam Quidditch Association, which got subscribed by a thousand fans now. But what makes me really proud is our good progress on the way to go pro. We do weekly extensive training and the development is visible on everyone.”

The team is aiming at the first Asian Quidditch Cup in 2016, expected to take place in Malaysia.

“People always ask if we fly to play,” says Quy jokingly. “You know, we don’t. But we can fly in far more meaningful ways. Everyone just has to imagine better.”